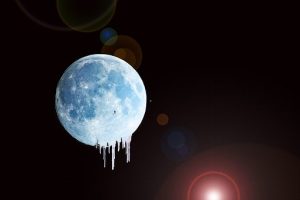 In 2006, former Vice President Al Gore release his book and video, “An Inconvenient Truth.” It brought to the world’s attention the problem of global warming. Since then, we have had to change the term to “climate change,” because people took the term “global warming” too literally. When winter didn’t disappear they thought it was all hyperbole and didn’t believe it. There were and still are people who would be happy to see those ice caps and glaciers melt – oil and mining companies, for example, and shipping companies. They don’t seem to comprehend what rising sea level will do to their land bases. Or maybe they are like my father, who said that he would be dead so he didn’t care. Others say that this can happen naturally and humans aren’t to blame. So let’s look at this first.

Let me say that, yes, this can happen naturally but the things that would cause it to happen – as drastically as we are currently seeing – are not happening naturally. In fact, we were in a cooling period before this heating trend began. So now that we have that out of the way let’s look at earth history.

We have run the gamut, from raining fire and brimstone to snowball earth. It is, in fact, a very delicate balance of global warming that allows us to live here as humans. But there have been times that that balance has gotten way out of whack, making the planet virtually uninhabitable. Snowball earth would still be a snowball if volcanoes hadn’t broken through the ice and started putting greenhouse gasses, mainly CO2,  into the atmosphere and started to create global warming. 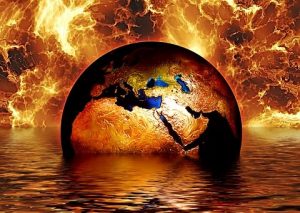 At the opposite end, the Permian (the last period of the Paleozoic Era) extinction was 95-98% complete and was causes by global warming. It happened in two major phases. The first was a massive extinction on land. The second happened as oceans continued to warm and massive pockets of frozen methane melted and were released into the oceans, causing a mass extinction in the oceans. That methane then finished things off on land. All organisms we see today arose from the 2-5% that survived this and later extinctions. Furthermore, most people know that it is thought that an asteroid finished off the dinosaurs but there is evidence that the dinosaurs were already in decline, due to global warming. 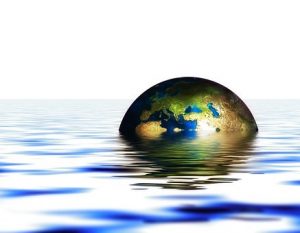 So fast forward to the Cenozoic. The Cenozoic, with its glacial and interglacial periods, might not be as unique as it seems. We might just have more information about it. We are currently in a period of glacial melt. Note, I didn’t say interglacial. As I used to tell my students, you can’t call anything “inter” until you have something on both sides. So the receding of the ice sheets has allowed humans to expand dramatically on this planet. Sea levels are hundreds of feet higher than they were during the ice age. We know that migrations have been curtailed, cities have drowned and populations have been isolated, due to the subsequent climate changes. But, those changes happened very gradually.

Humans and the Exponential Increase 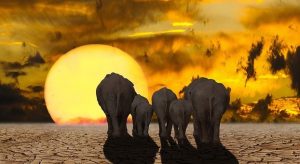 What we are seeing since the industrial revolution is an exponential increase in temperatures. Some say, ha, the temperatures aren’t increasing as much as predicted. That is on land, however. The temperatures of oceans have increased more. It only takes one degree centigrade of temperature increase in the oceans to cause a 30% increase in the intensity of hurricanes. This is happening now. Massive storms due to evaporation from those warm oceans will alternate with severe drought. We are seeing this now. Rising sea levels are impacting people now. To ignore this and say it is natural is the equivalent to pouring water on a drowning man, because humans ARE causing this drastic change.

Al Gore has a new book and movie out, “An Inconvenient Sequel – Truth to Power.” This time, hopefully, we will pay attention, but the current administration does not offer hope. Pulling out of the Paris Accords is a shameful and dangerous display of greed, self-interest and denial. But we, as people, don’t have to fall in line behind such ignorance. We can stand up and work to heal the Earth.