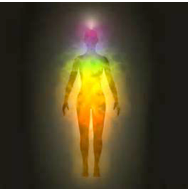 The chakras are ways in which energy can flow in or out of the energy field. In physics 101 you might recall the right thumb rule. This rule states that if you take the finger of your right hand and spin them in the direction a vortex in a magnetic field is spinning, your thumb is pointing in the direction that energy is flowing. Your chakras also govern different aspects of your physical, emotional, and spiritual incarnation and are the instrument panel that tells us what is going on in the body.